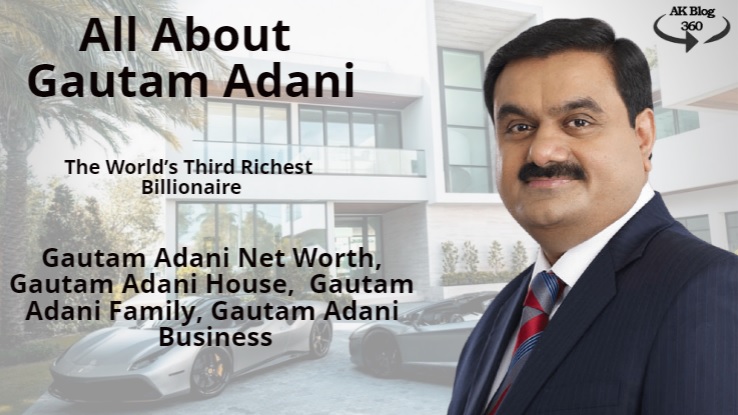 Hello guys, welcome to my new blog post “All About The World’s Third Richest Billionaire – Gautam Adani”. If you have a little bit interest in business news then you also know about the world’s third billionaire Gautam Adani. In this post, I will tell you almost all about Mr Gautam Adani.

If you want to know more about Gautam Adani then read this post.

Who Is Gautam Adani?

Mr Gautam Adani is an Indian citizen who is also a successful businessman and now he is third richest billionaire of the world. He is the founder of Adani Group.

Let start this topic with his early life. Adani was born in Ahmedabad (Gujrat) on June 24, 1962. His parents name is Shantilal and Shantaben Adani. Adani has 7 siblings and live in Gujarat. If we talk about his father’s occupation then his father is a small textile merchant.

If we talk about Adani’s education then you are socked that he is a college drop out. He took admission at Gujarat University and enrolled bachelor’s degree in commerce. But he dropped his collage in second year. Mr Adani was keen on business but he did not want to be a part of his father’s textile business.

Now it turn to tell you about his career. Gautam moved to Mumbai as a teenager in 1978. He was worked for Mahendra Brothers as a diamond sorter. In 1981, Gautam’s elder brother “Mahasukhbahia Adani” bought a plastics unit in Ahmedabad and offer him to manage the operations. This venture makes the gateways for Gautam Adani to entering into the global trading.

Then in 1985, he started importing primary polymers for small amount. And in 1988 he established Adani Exports which is knowns as Adani Enterprises. It is the holding company of Adani Group. Mainly this company deals in agricultural and power commodities.

In 1991, Adani’s economic liberalization policies works and then he expands the business into trading of metals, textiles, and Agro products. Adani got the contract of the Mundra Port in 1995.

After this, Adani was unstoppable and in 1996 he was founded the power business arm of the Adani Group, Adani Power. Adani power is a thermal power plant whose capacity is 4620MW.

In 2006, he entered the power generation and from 2009-2012 he acquired Abbot Point (Australia) and Carmichael Coal mine in Queensland.

He won the world’s largest solar bid by SECI (Solar Energy Corporation of India) in May 2020. And in September 2020, he acquired a 74 percent stake in Mumbai International airport which is the second busiest airport after Delhi.

In February 2022, he surpassing Mukesh Ambani and become Asia’s richest person. February 2022 is the time when he acquired Ambuja Cements and its subsidiary ACC from Holcim Group. And now he also acquired the national news broadcaster NDTV. But NDTV said that they did not know about this deal was done for Adani because the deal was done by the third party.

Gautam Adani is known as the close person to Prime Minister Modi’s ruling party Bhartiya Janata Party (BJP) that’s why some people raised a concern about editorial independence in India.